Thefounder and CEO of 3Music Awards, Sadiq Abdulai Abu has branded the Minister for Finance, Ken Ofori-Atta as a ‘liar and clueless’.

The minister during his 2020 budget reading on Wednesday, November 13 listed the creative arts industry as one of the incumbent government’s achievements since assuming office in 2017.

But Sadiq says it’s a complete lie and that the minister may be clueless about the creative arts sector.

He said the minister has refused to make budget allocations for the sector ‘because that organisation doesn’t exist’.

Sadiq described the statement as a ‘deceptive communication’ and further called on fellow industry people to ‘scrutinise the budget statement well’ because the minister is a liar.

He wrote (unedited): “It’s either Ken Ofori-Attah is a liar or he is simply clueless. As a finance minister, he is yet to make allocations in fact refused to make funds available to a unit under the tourism ministry for fear of being cited for causing financial loss to the state. Why? Because that organisation doesn’t exist.

What’s interesting to note is that, today and after declining to correspond to a “yet to be” established organisation, you announced to the whole world that it’s one of your achievements in 32 months. What kind of deceptive communication is that? Guys scrutinise the budget statement well. Ken Ofori Attah is a liar. It’s likely he lied about other areas too. #LiarsBrigade.” 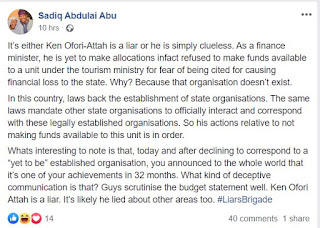