I’m the Deserving Ambassador for the year of Return 2019 ,Not Sarkodie -Ghanaian American Based Afro Pop Artiste ,KoJo Black

Recently Ghanaian Rapper and multiple award winner ,Sarkodie,amassed to himself a national Ambassadorial deal -Ambassador for the year of return 2019 from the Government of Ghana.

His fans and man have applauded him and congratulated him for that feat ,However,Ghanaian and American Based Afro Pop artiste ,KoJo Black , who composed ‘Sunshine in Africa ‘ to Honour the the year of return ,thinks Otherwise.

According to ‘Sunshine In Africa’ Hitmaker ,Sarkodie has done nothing to warrant that role ,and that it baffles him that the Government has overlooked his hard Work overseas,how he has composed beautiful tune to Push the year of return Agenda .

READ ALSO: Tell us what you did for the youth while in office – Matilda Asare dares Mahama


He wrote on his Facebook wall “Sometimes it saddens how Ghanaians misplace priorities,I was supposed to be the Ambassador for the year of return ,not Sarkodie,tho Sarkodie is a good artiste,but I have sent messages that are pushing the year of return through my song ‘Sunshine in Africa “ 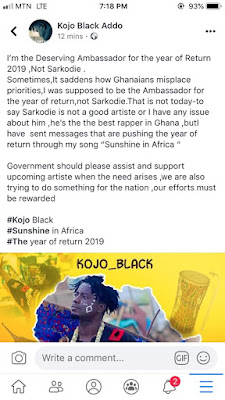 Click on the link below to listen to his song

You a Thief and a Scammer , Awal throw shot at Fameye.

You a Thief and a Scammer , Awal throw shot at Fameye.