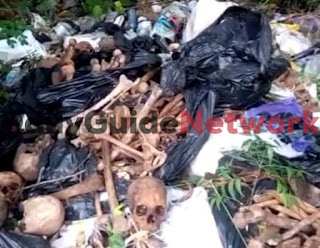 DGN Online has gathered that about 10 big bags containing human bones and skulls, have been dumped on a refuse site around Larteh in the Akropong North Municipality of the Eastern Region.
It is unclear who dumped the bones in the area.
Residents around the refuse site have expressed shock over the issue.

Meanwhile, reports said the police have been informed and are likely to investigate how the bones got to the site.
More soon.

Bullet never asked me to divorce my husband – Ms Forson

Bullet never asked me to divorce my husband - Ms Forson