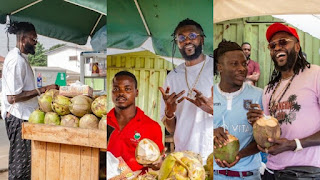 Togolese professional footballer who last played as a striker for Turkish club Kayserispor, Sheyi Emmanuel Adebayor is the true definition of a good-hearted person.
The footballer has been very kind since day one when he stepped into the country, Ghana.
His charity work and an act of kindness could also be traced to Togo, specifically Totsi-Lome.
A while ago, Celebrities Buzz shared a story on how Emmanuel Adebayor blessed the life of a coconut seller at Adjiringanor.

We indicated that Emmanuel Adebayor called on all his fans to join him at Adjiringanor near Asamoah Gyan’s Filling Station 2 days ago to have a coconut party.
This came after he got touched by the story of a coconut seller who he later invited into his house.
During the coconut party, the likes of Hisense Ghana, Stonebwoy and King Promise joined hands in supporting him.
Just today, it has emerged that Emmanuel Adebayor actually purchased a coconut at Ghc200.00 which is a hundred times its usual price.
They made sure that they consumed all the seller’s coconuts.
The rich footballer while sharing the story stated that they managed to consume all the seller’s coconuts during the process.
Shockingly, the coconut seller broke down in tears after realizing the amount of cash he’s made through the process.

#CoconutFriday. I promised @samuel.acheampong.58323431 owner of Virgin Fresh Coconut, that I would bring my team and celebrity friends. Usually, one coconut goes for 2GH Cedis, but for that day we paid 200GH Cedis per coconut.
I offered to match the total amount of sales that day. To his surprise, more and more celebrities kept arriving and a huge crowd assembled by his stand. @hisense_ghana also joined the party and made a huge contribution.

At the end of the day, we made them count. Words cannot describe the feeling when I saw the emotion on his face as he realized the total amount of money raised that day. I would like to thank everyone that joined me in supporting this man’s business (Virgin Fresh Coconut).
We rise by lifting others! @stonebwoyb @iamkingpromise @small_god @djboto10 @mr_bawa @iamsellybee @ukdjice