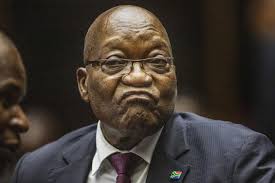 A judge in South Africa issued an arrest warrant Tuesday for former president Jacob Zuma for failing to appear in court on a corruption case that he has sought to avoid for months.

The warrant was issued after the National Prosecuting Authority requested it, the South African Broadcasting Corporation reported. Zuma was meant to appear in front of the Pietermaritzburg High Court.

Zuma has claimed to be ill. Reports have said he is in Cuba seeking treatment. No details have been given about the state of his health.

The NPA also requested Zuma’s medical records as evidence of his claim that he is too ill to appear, the state broadcaster reported. State advocate Billy Downer told the court that Zuma’s team has said he will be out of the country for treatment until mid-March, the report said.

A court late last year dismissed Zuma’s attempt to appeal a ruling that cleared the way for him to be prosecuted.

He is accused of receiving bribes from French arms manufacturer Thales through his former financial adviser Schabir Shaik, who was convicted of fraud and corruption in 2005.